Probably the first structure on the top of the mountain was built before 1877 was a log cabin. Dr. James Ferguson from Glens Falls purchased the mountain and built a structure there. He bought Prospect Mountain in 1877 and renamed it "Mount Ferguson". He built a hotel on the summit which he promoted as a sanitarium for people with pulmonary disorders. The sanitarium burned down three years later. The hotel was rebuilt and renamed Prospect Mt. House. William Peck purchased it and added a restaurant and dance hall. 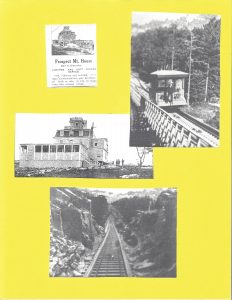 During the time in which the Ferguson house stood on the summit, to get to the hotel a person would either have to take a wagon up for one dollar or they would have to walk up the winding trails themselves. Others made the climb to witness the view of Lake George or to drink from a water spring that contained iron and sulphur.

This remained as the only option until 1895 when a railway was built to reach the summit and would cost fifty cents making it a cheaper and faster alternative. At the turn of the 20th Century, the inclined railroad was on the area's biggest attractions.

The inclined railroad was provided with the latest mechanical and safety devices and was built by the Otis Engineering Construction Company. It took six months to build. At the time, it was longer in point of altitude and higher than any other (cable railroad) in the United States.

A few choice rooms at hotel on top of mountain, with board, at $2.50 per day. Refreshments of all kinds at club house on top, at moderate prices. "Special rates for excursion parties". 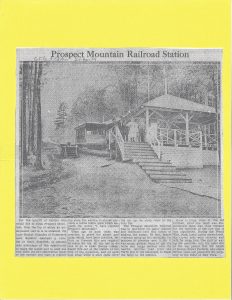 Another advertisement states the "Prospect Mountain House, at 2,021 feet above Lake George, serves lunches and soft drinks. Pool, billiards, and bowling. Overnight accommodations may be obtained; 1.5 hours by stage from Lake George Village."

The railroad ceased operation in 1903. The cars were left on the tracks and finally the track, trestle and cars rotted. The metal from the operation was donated to the World War I effort. The dance hall and bowling alley on the summit eventually burned down.

However, the railway only remained in service for eight years and would be scraped to support the First World War. In 1920s the last owner of Prospect Mountain, George Foster Peabody, would come to give all of the land over to the state so it could be used for recreational reasons. At the peak of the mountain many fire pits and tables were made for this.

The mountain would regain its popularity in 1969 when the road was built allowing people to drive up to the summit. For an alternative hiking path, the location of the old cable railroad was used making it more accessible than previous foot paths. Ideas for the highway were discussed in the 1930's but the project never officially started until 1966. The cost of this road was almost 3 million dollars. The road would get the name Veterans Memorial Highway since it was dedicated to Veterans from the Second World War. Along this road there are three stops at locations that were made to give people a good view of the lake. Near the peak, land was cleared to make room for a new parking lot. Prospect Mountain has remained in a similar state since then.

*It is interesting to note that this is the same Dr. Ferguson who built the tiny house at 5 Culvert Street in Glens Falls that has recently been in the news, as there is a movement to save the building from total destruction. Built in 1871, the little house on Culvert Street is tucked behind the Warren Tire Service Center at 110 Warren Street.

According to an article that appeared in an undated newspaper article from The Chronicle, the house was a replica of Dr. Ferguson's home on the corner of Culvert and Warren streets. Dr. Ferguson lived in the big house and used the miniature replica as his office. The bigger house was razed in 1935.