Thanks to the generosity of Jean Corene (Hayes) Kory of Drums PA, Warren County has received a silver-plated brass watchfob, a souvenir of our 1913 Centennial celebration, owned by her great-grandfather Clayton Young Kenyon. A special exhibit has been created just inside the southerly entrance of the Warren County Municipal Center on the east wall, the case including the watchfob and other items commemorating his life and reminding all that the county will observe its 200th anniversary in 2013. Clayton was born July 18, 1853, in the Kenyontown section of Thurman, to John Sewell and Sarah A. (Parker) Kenyon. On October 21, 1877, he married Jennie June Reynolds, daughter of Dr. Thurston and Fanny Anna (Everts) Reynolds. His early years were spent on his family's farm, and on May 1, 1881, he opened a general store in Thurman. In 1895, he moved to Warrensburg, residing on Horicon Avenue and working for the Empire Shirt Factory there. He was an active member of Warrensburgh Lodge, 488, I.O.O.F., and was keenly interested in local and state politics. In 1940, he died at the home of a daughter in Branford CT and was buried in Warrensburg Cemetery. The children of Clayton and Jennie were Blanche Kenyon, Cecile Mae (Kenyon) Hayes, John Thurston Kenyon, F. Geneva (Kenyon) Hamilton, and Ruby Corene Kenyon. In addition to the watchfob, the exhibit features a 1913 Warren County centennial program book cover; an old photograph of members of the Odd Fellows Lodge, with Clayton in front row, at far right; and entries from his diary of 1874 and 1877 when he lived in Thurman. 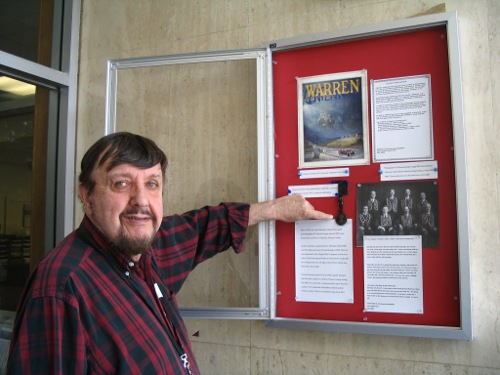