The Warren County Correctional Facility constructed in 2004, is located at the Sheriff’s Office Public Safety Building in the Town of Lake George, and provides detention for arrested individuals as ordered by the courts within the County. These Courts include City Court, Local Justice Courts, Superior Courts and Federal Courts.

The Facility has a maximum of 184 beds, providing custody for local, state and federal prisoners. The current staff of 100 for both sworn officers and civilians maintains the day-to-day operations of the Facility.

During the past year, over 900 prisoners were admitted to the Facility. The average daily inmate population was 104.

Bail can be paid at anytime.  Cash and Credit Card are the only acceptable forms of payment.  If a credit card is used, a separate fee is attached.

Money can be deposited into an inmates account by visiting https://www.accesscorrections.com

After initial admission all allowable property must be purchased from and mailed to the facility directly from a vendor whose ordinary business includes the sale and shipping of the item(s).

All publications for inmates must be received directly from an outside vendor (i.e. Amazon, Barnes & Noble, Boarders, Wal-Mart, etc.).
All publications must be shipped directly to the facility from the vendor via postal carrier (i.e. USPS< UPS, Ded Ex) to:

Inmates may be in possession of six publicastions (i.e. books, magazines, Bible).

All hard cover books/publications are prohibited.

Prohibited publications may be retained with the inmate's secured property, sent out of the facility or destroyed at the request of the inmate.

Sexually explicit material, nude photographs or any other offensive content is prohibited.  Such restricted content shall include any publication which advocates or condones illegal or socially unacceptable conduct.

VINE communicates with jail and prison booking systems in near real-time, transmitting updated information to the Appriss Data Network.  Victims can inquire whether an offender is held in jail, as well as the facility's location.  Users can register to be notified immediately of a change in the offender's status, such as release, transfer or escape.  When a notification is triggered, VINE automatically calls the number or numbers the victim provided.  Calls continue for a designated period of time or until the victim enters a four-digit PIN. 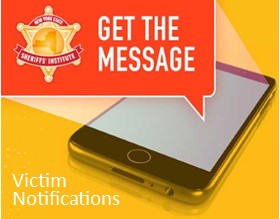